Upgrades to the Power Miners Mine Mech! 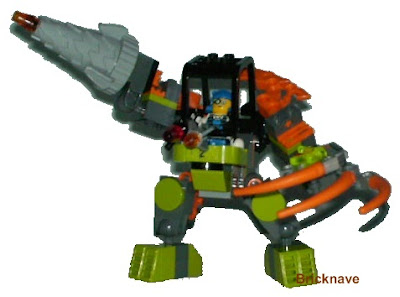 When I first received the Power Miners Mine Mech, I thought it was very cool and Exo-Force like, but it was also very very skimpy.  So I added upgrades to the Mine Mech so that it will last longer against a dozen or so pesky rock monsters!  Instead of a spinner that isn't good at drilling; I added a normal PM drill!  The I noticed that the claws could use some more work; so I made them more dangerous.  The legs and arms I improved plus I added a few defenses in-case a Boulderax rock monster shows up.

Remember:  If you think that an instructions-followed model needs some work, don't be afraid to add a few extra pieces from your collection.
Posted by Bricknave at Monday, January 05, 2009

Wow, that is cool. I got the Claw Digger today!

I have the Claw Digger too! It's a neat set. I really wish I had the Thunder Driller though ......