A review for LEGO BATMAN THE VIDEO GAME 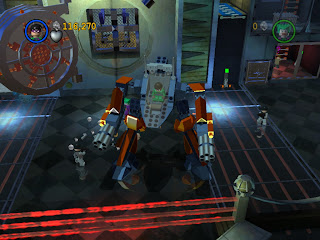 Like the LEGO STAR WARS and LEGO INDIANA JONES games, LEGO BATMAN is a great addition to your game collection.  It is a great addition even if you don't have a collection, well, onto the review.
Like past games, this game has a co-op player drop in or drop out style of gameplay if you have friends over.
While playing as Mini-Fig Batman and his allies or Batman's foes, you can battle your way through tons of enemies, without all that gore other games have (the enemies are plastic after all).  You can build with virtual Bricks!  Unfortunately, you can't control what model they become, but I think that this is time saving.  You can collect many items like in the past games!  These items are 1x1 round plates called "Studs", hidden canisters that you collect to build mini-models called "Mini-Kits", plus Bricks that give you upgrades or cheats called "Power Bricks".  These items were found in the LEGO STAR WARS and LEGO INDIANA JONES games, except the ones in LEGO Indy were called different things.  Studs are actually the little nubby things found on top of LEGO Bricks, which doesn't make any sense for a 1x1 round plate to be called that.
You can use 1x1 round plates to buy things like characters, Batman facts, Power Brick abilities plus more.  When you play the levels, you may encounter something that includes thought.  Yes, puzzles and tricks may tease your brain throughout the levels.  When you beat a story level, you may do it again in free play to collect the collectible items you probably could not get when playing the story levels.  Another great thing about gameplay is that the levels are not based on the movies, they have stories of their own.  Which means that they don't have to be accurate to the movies.  You might have seen a part or two that wasn't accurate to the movies in the past games, so when playing this game you don't have to shout "Hey, that never happened in the movies!  [Insert movie character name here] never did that!"
It all boils down to the results; if you don't like LEGO or BATMAN, you should not buy this.
Remember, THIS GAME WAS NOT MADE BY ME!
Posted by Bricknave at Wednesday, October 08, 2008